Dodgy Kips motor? CDI? battery? diode? reg/rect? its all gobbledygook to me but some people understand it ask tham a question here
Post Reply
33 posts

Hello
The information I wrote in the post was taken from a old Greek motorcycle magazine article,its not mine test.of course the dyno results is the true story.
I was looking closer to the pictures from the kit cdi and I notice in the diagram the part# 26001-1923 it's a connector with 2 wires 1 to ground to frame and the other to pink???the part# 27010-1266 what is it??
Thank you
Spyros
Top

I will book the dyno now for Monday or Tuesday next week when my mechanic is free to come and drive us. I did end up doing a fairly neat job with the resistor in the end by feeding its tails up inside the 12v wire core (having trimmed them back a bit) and then melting the solder into the core of the wire so it is pretty stout. I then covered each end with some spare rubber bullet connector covers and used heat shrink to keep them in place, leaving a little gap in the middle of the resistor in case it needs to shed heat. Really looking forward to seeing what the results will be, let you all know next week

Looking at the 1988 KR-1 SP/F3 parts catalogue, 26001-1923 is a "harness, stop switch". Although it isn't shown separately on the wiring diagram, it looks as if it takes the kill switch wire from the CDI unit into the main wiring harness and then up to the handlebar kill switch assembly (27010-1266) and also does the same with the earth wire.
According to the wiring diagram, the kill switch wire colour should be white with black stripe, not pink. One of the photos for the '1278' CDI unit on Yahoo Auctions at the moment https://page.auctions.yahoo.co.jp/jp/auction/p701619963 seems to confirm that the colour of the single wire from the CDI unit is white with black stripe.

We had a good day at the dyno today and the results are in! Don't get hung up on the what the power figures are, every dyno is different. The important bit is the comparisson of how each CDI preformed. The weird thing was that during the JDM run without the resistor fitted it wasn't obvious that the power was restricted. It sounded normal and didn't appear different to the KR-1S CDI in terms of how the bike sounded and how the revs built up. I had the same experience when I ran the bike up in the garden on Sunday, infact I was worried I had imagined the loss of power when I used the CDI at Brands for those 2 laps. The dyno operator Tony Greenslade had the same sensation, yet the power curve says it all. As he said, unless you used the 2 CDI's back to back you wouldn't have the sensation of the lost power. Well that is until another KR blasted past you like you were standing still!

Tony was amazed at how smooth the power curve with the standard CDI was, and he has many two strokes coming through his door. He was also struck by how similar the power curves were until the JDM one hit it's restrictor. During the JDM run with the resistor fitted he felt the brief cough before the power curve resumed. I could hear the engine have a slight hesitation at this point as well. All power curves are done with 3 runs each and an average taken and all 3 runs with the JDM CDI with resistor fitted had exactly the same momentry hessitance at approx 10,300 RPM. He also noted that the curve was never as smooth as the KR-1S CDI either. All 3 runs had the same wobbles in the power curve.

The KR-1 CDI was very obviously lacking in power, again not something that would be obvious until you had two bikes to compare or were out for a ride with a friend with the full power KR-1S CDI. The other thing of note was that all CDI's absolutly matched each other with little or no difference. So it's official - all the pub talk of some CDI's being "fitter" than others is just not true. My 2 KR-1S CDI's matched each other exactly although Tony has not printed out the spare "S" CDI run on this comparison sheet it was identical to my original "S" CDI that I have been using since I got my bike in 1991. Tony also reassured me that in his experience there is generally little difference in CDI's unless they have an obvious fault. In other words they work or they don't! In terms of the KR-1 CDI my guess would be that Kawasaki always had the full power CDI but initially just wanted to see how reliable the engines were before giving us the full package. The curve is so much more conservative compared to the KR-1S CDI, again exactly mirroring the full power curve until it hits the midrange and gets significantly restricted.

Sorry but I have a technical hitch and can't work out how to attach the file. Have saved it as a word document which the "add files" button doesn't seem to like. Tried to save it as a JPEG but it still says file to large. Will get help from Bernie tomorrow, what a pest

my feelings to when I tried a KR1 CDI inmy S a long time ago : the KR1 CDI gave noticeable less power in the higher rev's , and if my memory is corrcect even had a rev limiter, while an S CDI keeps going when you tune the engine to make it breath better.
My ultimate goal is to die young as late as possible !
Top

Interesting that with the resistor the CDI curve matched the European CDI. We now KNOW how to bypass the restriction!
"Mine is a long and sad tale", said the mouse.
"Indeed it is", said Alice, looking at the mouse's tail.
Top

Yes to a degree but wait to see the curves, Bernie is on the case with that one to get the images up. I still wonder if it can be improved on. 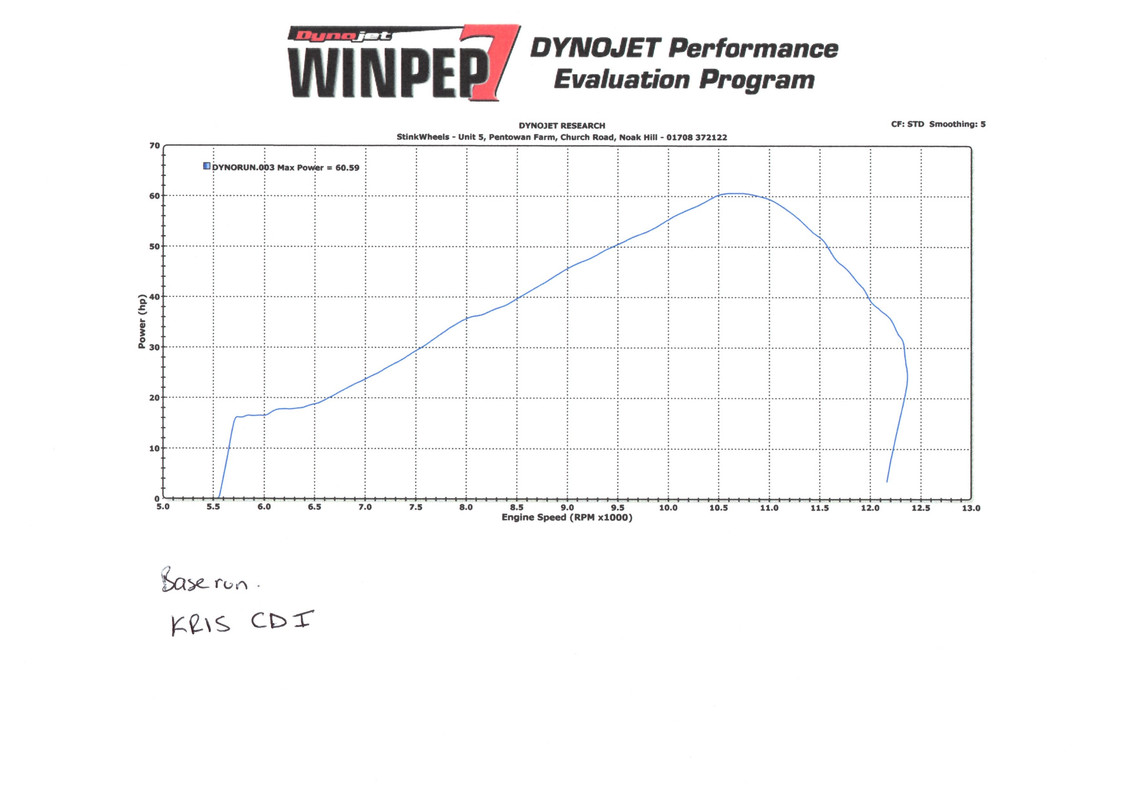 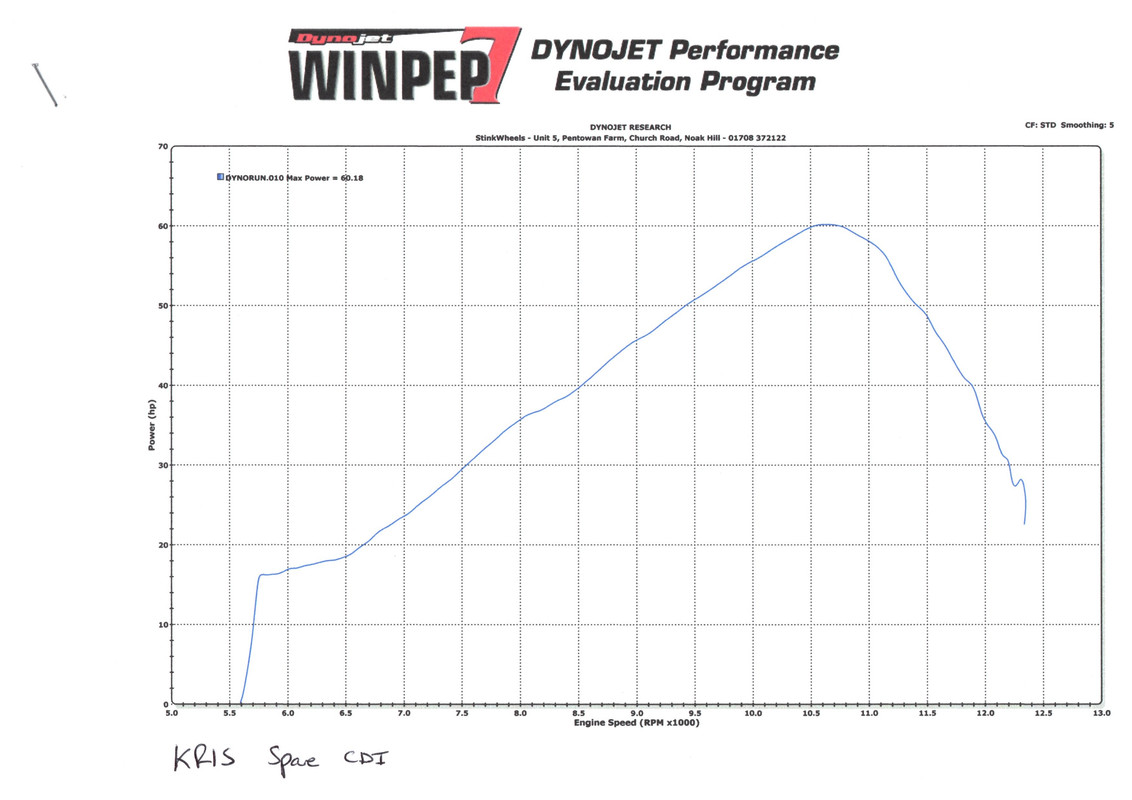 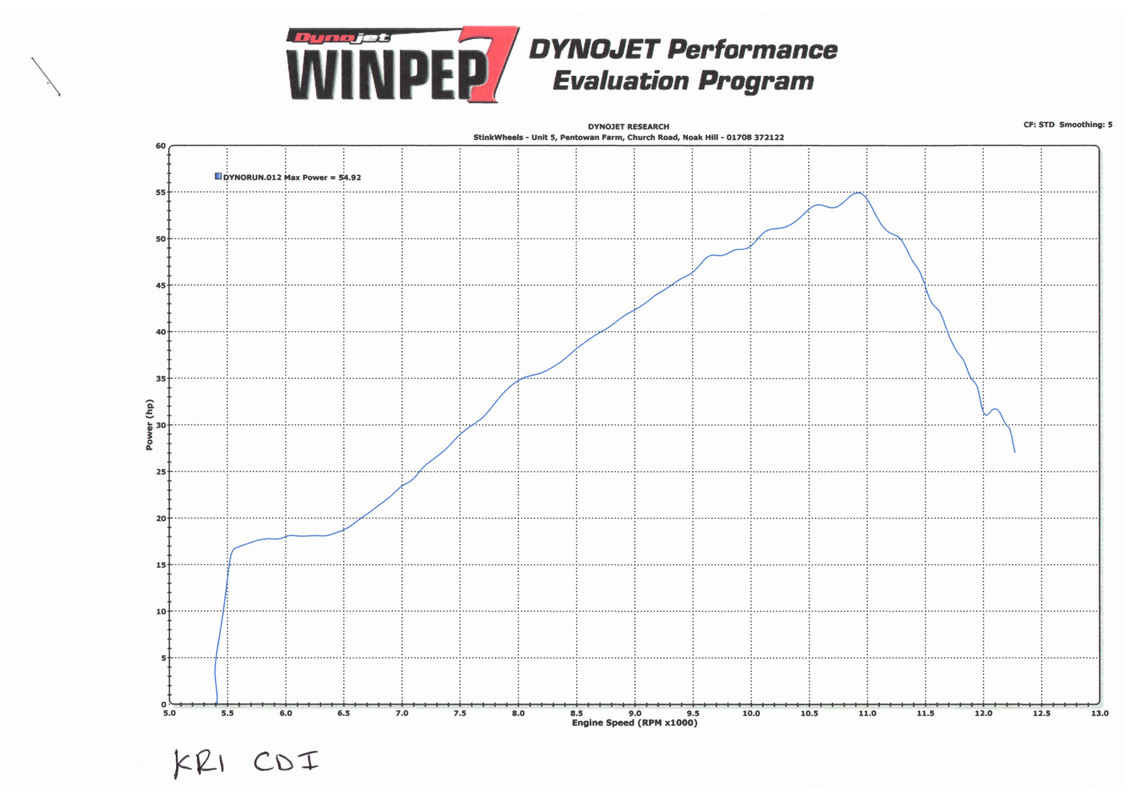 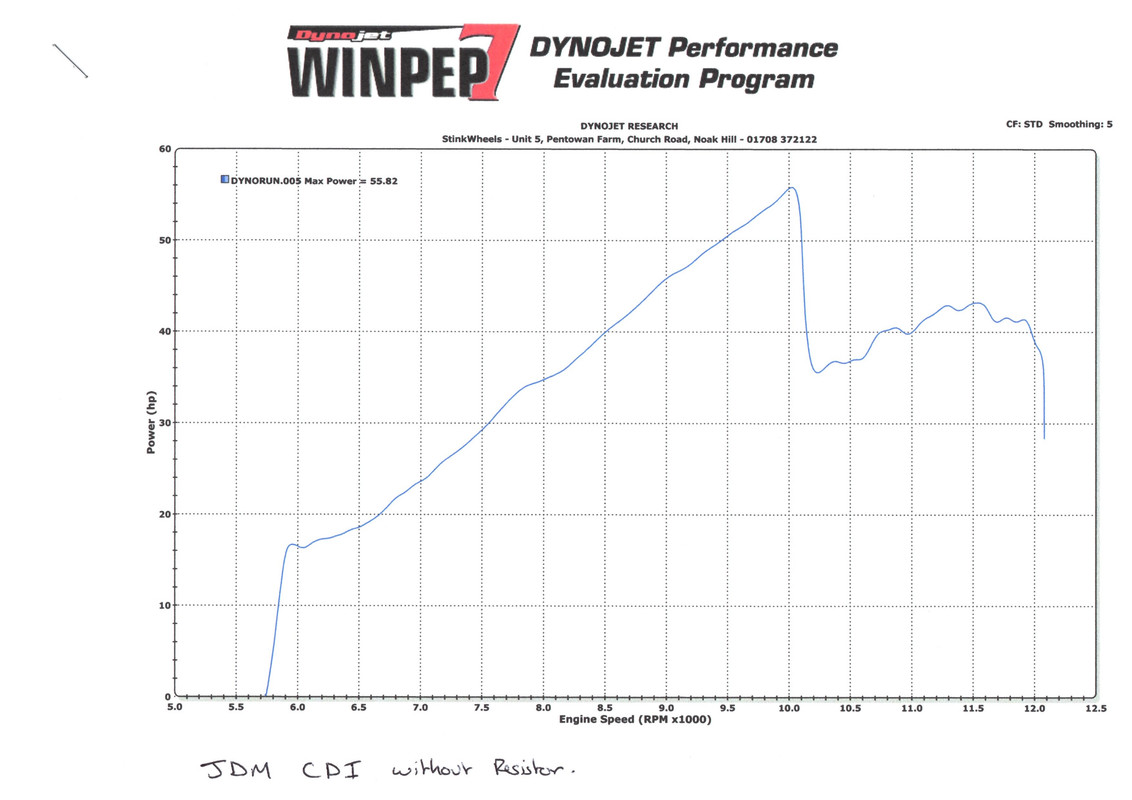 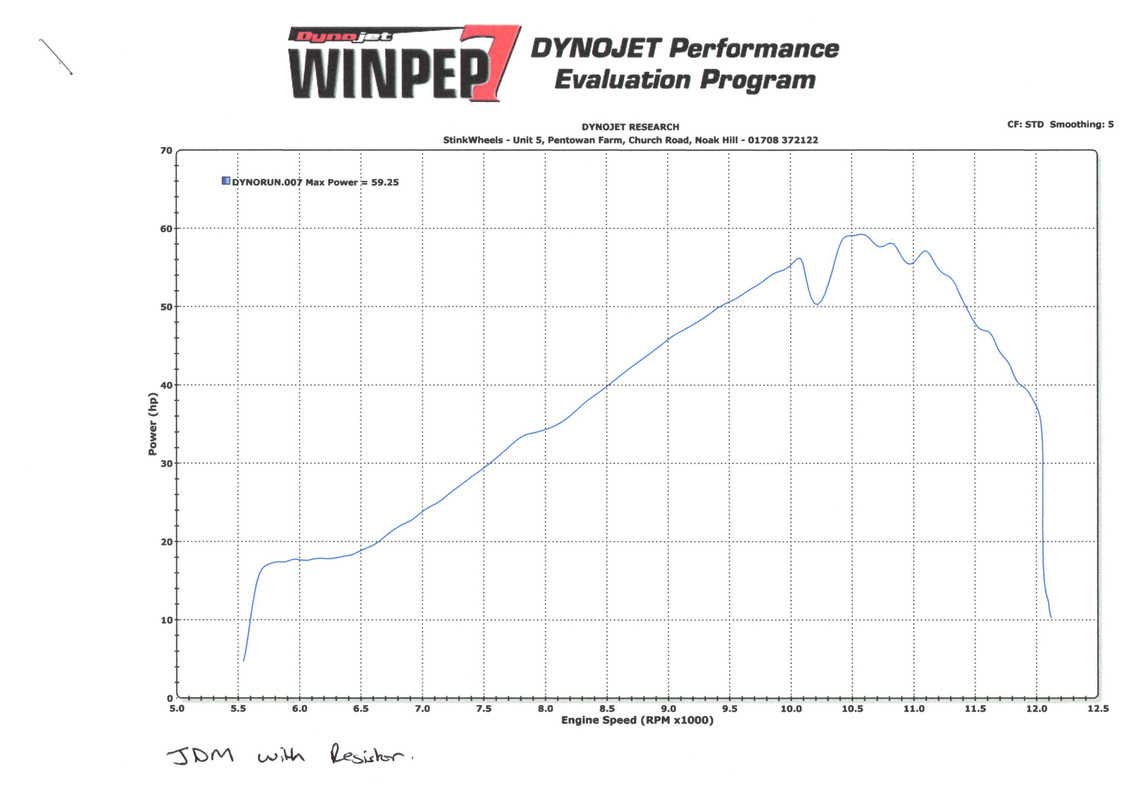 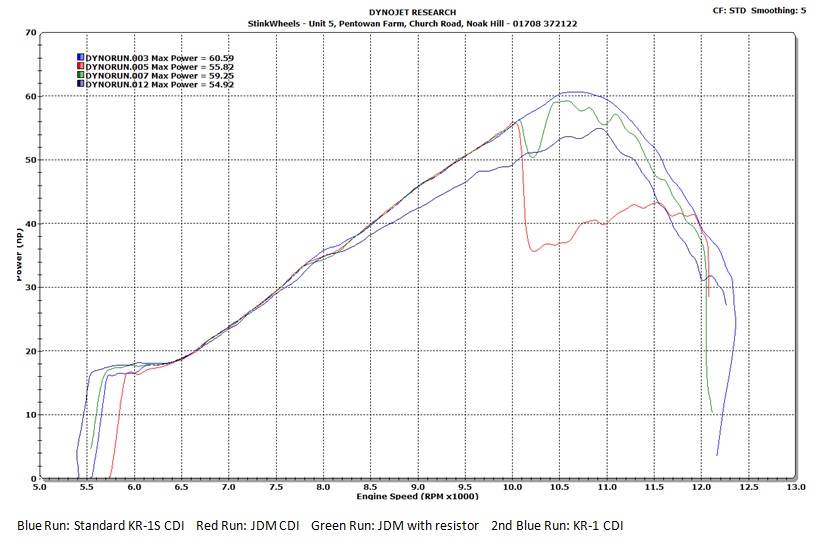 So a huge thanks to Bernie for getting these runs up, and hopefully tomorrow he will get the final graph of all the runs on top of each other downloaded (a bit trickier as saved in yet another format - sorry Bernie).

I used a 18,000 ohm x 1 watt resistor. If that helps those of you who understand the dark art of electronics

I know this is off topic as such, but one thing I will say is that I reckon you'd be able to improve your over rev considerably with a programmable ignition. If you haven't thought about it yet, I'd really recommend it. You can even borrow mine to try if you like next time you go to the dyno. The way the curve tails off after 10.5k can be improved, I'm certain.

Oh my, Bernie has also been telling me the same thing. New tech is amazing stuff but I have shied away from it simply because so many people seem to get in trouble with it and suffer really poor reliability. I also realise that you guys who know a thing or two realise it’s potential. I will definitely look into what’s involved and who is able to program the units successfully. There will clearly be so many advantages including modern components, weight loss, faster pick up etc. Thank you very much for your offer, I may well contact you about it in the coming months!

I'd guess that with 2-3 hours on the dyno you could make it alot better than it is now after 10.5k. There's probably alot less to gain before 10.5k looking at your curve, but you never know, might be a horsepower or 2 somewhere with an ignition curve tweak.

I attach what we achieved in about 2-3 hours just playing with the ignition curve on my 3xv.