Twangled your powervalve grommit in your woodruff key? ask someone how to fix it here
Post Reply
14 posts • Page 1 of 1

I think different cylinder heights are likely to cause head gasket failure and creeping of base gaskets.

I've measured mine after having problems with the base gaskets slipping out and found heights were 0.35 different! I recently had one replated and the top of the cylinder was linished slightly convexly which made me think how accurately are they finished after replating. I've had the top of my barrels lapped flat and then I lightly skimmed the base where gasket sits then re measured height and used different thickness base gaskets to eaqual them up. I checked the optimum gaskets after bolting the barrels down to the cases and putting a straight edge across both barrels, you can measure any step in height with a feeler gauge.

Any time a cylinder is re plated it may easily be shortened slightly. I think the original cylinder measured 90.7mm high but will check, shortening in height will affect comp ratio, squish and eventually make the power valves tight against the head gasket

Head gaskets are now discontinued from Kawasaki! very useful of them!
Hardcore you know the score
Top

All of the cylinders I have (both KR-1 and KR-1S) are 90.6 mm and I believe that is the standard height.

As for the head gasket, no doubt there are aftermarket gaskets available. One of the heads I have has grooves around the combustion chambers for an "O" ring which is a superior arrangement and I'll probably have the others converted as well.
"Mine is a long and sad tale", said the mouse.
"Indeed it is", said Alice, looking at the mouse's tail.
Top

I can remember an article in Performance Bikes from back in the day where they tuned a KR1 and said how poor the manufacturing tolerances where on the engine, noting the differing heights of the barrels and IIRC something around the KIPS valves sometimes being tight to move in their housings for similar reasons...
Top

much easier and cheaper to work on and long reusable lifespan of Viton orings.

Do you use an oring or two around the perimeter for the water / coolant jacket as well? this is more likely to need a cnc mill to machine an irregular groove. I guess it would be nice to cross section a scrap head to check how much metal there is to spare. What cross section diameter orings do you use Gerrit?

Sounds like some one has noticed the poor tolerances a long time ago then, so maybe not just a result from re plating.

Aftermarket head gaskets have a bad reputation for leaking coolant, although I've only used genuine so far.
Hardcore you know the score
Top

With the water jacket you would also need to seal the power valves and use copper or dowty washers to seal the head bolts, I can see why sealant is easier short term choice.

Any one with a scrap head spare?!
Hardcore you know the score
Top

The "O" ringed head I have has grooves for rings around the combustion chambers only, dimensions of the grooves are:
ID 60 mm, OD 65 mm, depth 1.7 mm so the "O" ring cross section is probably 2 mm. The head has also been skimmed significantly, about 2 mm, and new combustion chambers cut. The spark plug threads are shorter and suitable for 5/8" plugs rather than 3/4" reach, requiring copper spacers between head and 3/4" plugs. The two other heads I have are bog-standard.

I noticed BDK offer an "O" ring conversion for RGV heads, so perhaps they can also do this for KR heads.
"Mine is a long and sad tale", said the mouse.
"Indeed it is", said Alice, looking at the mouse's tail.
Top

I have a 4DP TZ250 cylinder which has "O" rings around the combustion chamber and the perimiter; the head bolts (6 per cylinder) are sealed by gaskets according to the 4DP parts catalogue, part No. 90430-06616. I don't know whether these are Dowty seals or simple copper rings, though.
"Mine is a long and sad tale", said the mouse.
"Indeed it is", said Alice, looking at the mouse's tail.
Top

Could the head gasket be replaced by a 0.6 mm thick laser cut copper gasket?
Firecracker Red and Grey C3 300
Top

This came up in conversation today with my KR-1 chum. It would certainly be worth a try.
Top

I think I will have a look into it.
Cheers
Bernie

you could reuse copper gaskets on air cooled motors
BUT
youd prob need to rubberise them like the oem ones are coated.
BECAUSE
introduce a liquid and you might have a galvanic corrosion problem.

"When dissimilar metals are in contact with one another in the presence of an electrolyte, galvanic action occurs, resulting in the deterioration of the metal with the lower galvanic number. The electrolyte may be rain water running from one surface to another, or moisture from the air containing enough acid to cause it to act as an electrolyte.

Since copper has one of the highest galvanic numbers or nobility of the active metals, it will not be harmed by contact with any of them. It will, however, cause corrosion of the other metals if in direct contact. The solution is to prevent such direct contact with the use of separating materials, such as specific paints or gaskets."

"Regardless of the method used to separate the metals, wash from copper surfaces should be prevented from draining onto exposed aluminum. Traces of copper salts in the wash may accelerate corrosion of the aluminum."

Hi Danny,
Every day is a school day

So the black (ptfe) coating on the standard gasket is there to prevent galvanic corrosion between the steel gasket and the alloy barrel/head?
Cheers
Bernie
Firecracker Red and Grey C3 300
Top


I'm sure the coating on the OEM gasket is a sealant given the thinness of the sheet and non compressibility.

ever make a battery cell out of a potato and create current?
or the metals and electrolyte used to make your car/bike battery... 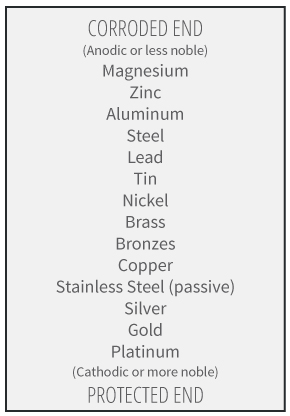 As in zinc blocks are sacrificial protection for hulls of steel ships.
Also why Aluminium coatings are an alternative protection to traditional galvanizing of steel sheets such as the chassis components of your PC or the roof of your house.

The nobility difference/listed separation of Cu vs AL is why copper spouting or flashings are not friendly to aluminium joinery and something Architects need to be aware of.

som more trivia
The most electrically conductive element is silver, followed by copper and gold.
Silver also has the highest thermal conductivity of any element and the highest light reflectance.
Although it is the best conductor, copper and gold are used more often in electrical applications because copper is less expensive and gold has a much higher corrosion resistance (does not tarnish like silver)
which is why gold is default coating on audio connectors etc
Top

Fair comments, I forgot about that....

Last night I sent an enquiry to Cradley to see why they're presently listing output shaft seals as being no longer available, where whilst I was on I asked about the possibility of sourcing the Vesrah pattern gasket set. It has to be better than what we have now...
Top
Post Reply
14 posts • Page 1 of 1